Blue Pottery Jaipur items are involves in one of my bucket list wish are going to be one of the most highly devoted parts of the house I own. Its deep blue colour & delicate yet impactful designs never fail to attract me. I find myself forever bounded to buy and decorate them to create my happy place. How alluring they appear to be carrying that deepness which defines the craftsmanship of the artists involved in the making.

One steps into the enchanting old city of Jaipur, we always find ourselves surrounded by an epiphany of crafts of every kind. What binds them all in the husk of the heat and the lure of the tales is an unending array of colours and motifs, be it pottery or textiles. Blue Pottery Jaipur, ever so elegant and always fragile, is a Craft, the pink city is celebrated for; distinguished by a vivid blue and turquoise colour palette, a blue pottery Jaipur is what defines sheer beauty. I have been in awe of them all through years.

The history of the art of pottery is as old as the history of mankind, with the glazing techniques travelling to India from Central Asia and the Middle East through several Islamic invasions while the Chinese porcelain continued to be imported to the Indian courts. Founded in 1727 by Sawai Jai Singh I, the historic city of Jaipur was well established as a thriving art centre. Ram Singh II attended a kite flying session and watched two brothers from Achnera bring down the royal kites of his kite masters. Intrigued, he found the secret; they were potters by profession and had coated their strings with the same blue-green glass that they used for their pots.

Blue Pottery Jaipur is as old as time and the technique of using blue glaze on pottery was first developed by the Mongol artisans. They combined Chinese glazing technology with Persian decorative motifs and the art came into India in the 14th century. Until its arrival in India, the blue pottery was used only for decorating palaces, mosques, and tombs in Central Asia. In India, their role changed from being architectural accessories to beautiful pottery items moulded on a potter’s wheel and the Mughals are believed to have made them very popular. The trend of the blue pottery reached Jaipur in the 17th century and there is an interesting legend connected with the trail.

The process of making blue pottery is tedious and time-consuming. The dough for moulding is prepared by mixing the key five ingredients, previously mentioned. It is then rolled and flattened to the form of a 4-5 millimetre thick ‘Chapatti’ which is put into moulds with a mixture of fine ‘Bajri’ and ashes from the burnt wood.

The mould is now turned upside down and removed, and the dough obtained is left to dry. The pottery item, cleaned and shaped, is rubbed with the ‘sandpaper’ for a shiny surface. It is then dipped in a solution of quartz powder, powdered glass, edible flour and water and dried.

A design is made on the dried, coated vessel with a solution of cobalt oxide and edible gum and the colouring is done by using oxides of various metals. These oxides are mixed with edible gum and then ground on the stone and applied using a brush. What gives the final touch is a coating of glaze, done on the products by mixing powdered glass, borax, zinc oxide, potassium nitrate and Boric acid.

This mixture is melted and cooled to form small pebbles which are ground to a powdered form and coated on the vessel after mixing with water and refined flour. Finally, the prepared products are heated in the closed kiln fuelled with charcoal at temperatures of 800 to 850 degree Celsius. 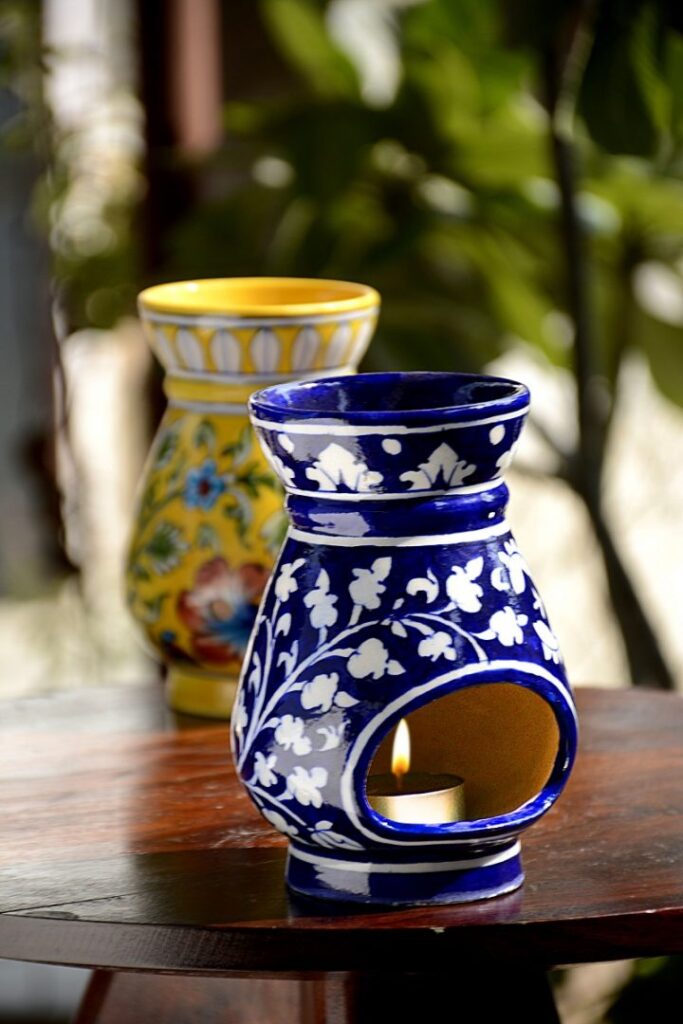 The name ‘blue pottery’ comes from the eye-catching blue dye that’s wont to colour the pottery. The pottery features a unique appearance because it is formed using Egyptian paste, glazed and low-fired. This is an art form that stands distinguished from all other sorts of pottery due to its usage of a special dough prepared by mixing quartz stone powder, powdered glass, Multani Mitti (Fuller’s Earth), borax, gum and water.

It is the only pottery in the world that does not use clay. The technique beautifully produces decorative items like tiles, doorknobs, pots, vases and plates. The colour palette of the Blue Pottery Jaipur is limited and its unique name comes from the striking cobalt blue liberally used in painting the items. The iconic blue colour of Blue Pottery Jaipur is derived from cobalt oxide, green from copper oxide and white, other non-conventional colours, such as yellow and brown are used sometimes.

The traditional patterns and motifs of Blue Pottery Jaipur are of Persian origins and some of these pottery items are semi-transparent. Mostly decorated with flowers, birds, animals, and twines, nowadays contemporary geometric patterns along with human figures are fast becoming popular. The craftsmen have developed contemporary patterns too including floral, geometric designs, animals, birds as well as many deities like Goddess ‘Durga’ and Lord ‘Ganesh’.

Technically, the Blue Pottery Jaipur had enormous potential and its popularity with the royal family should have ensured the art to be flourishing. Instead, it was on the verge of extinction and the main reason were the master potters who refused to share their trade secrets with their fellow craftsmen.

It had all but vanished until the 1950’s when the joint efforts of painter and muralist Kripa Singh Shekhawat and his patrons HRH Gayatri Devi, the Queen Mother of Jaipur and Kamladevi Chattopadhaya revived the art. Today it is once again a thriving industry which provides livelihoods to many artisans and is symbolically the face of Jaipur crafts.

2 thoughts on “‘Blue Pottery Jaipur – Journey to No Clay Pottery’”